Instead of jumping in a new and low power consuming Conroe I've decided to use in this test AMD Athlon 64 FX-60, which has TDP of 110W. I think it is pointless to test the power supply of high caliber equipment like the Galaxy with only 1 hard drive, low power consuming Conroe and a single video card, don't you think? Well, Quad SLI is a must but with Quad SLI only you won't stress it much ;) While monitoring the system with my multi-meter I started a DVD burn process, initiated a copy process of a total of 20GB files from one RAID to another, fired an SM graphics test from 3DMark06 in a loop at 1600x1200 resolution with enabled 8x AA and 16x AF. System become quite slow. On top of that I've managed to start a Prime95 to stress out the CPU which slowed down the system completely.

The following is the list of components of the test bed: 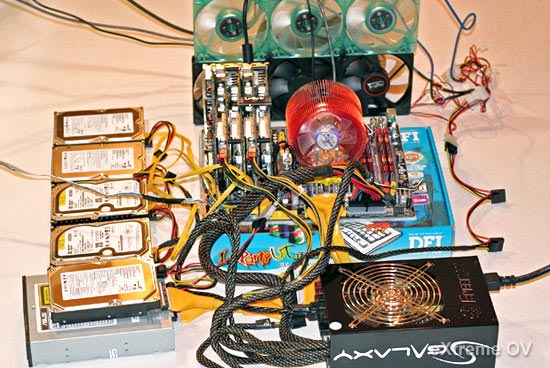 Noise level: The Galaxy's 135mm fan is just simply silent. The backside of the PSU has another fan which is also pretty quiet. 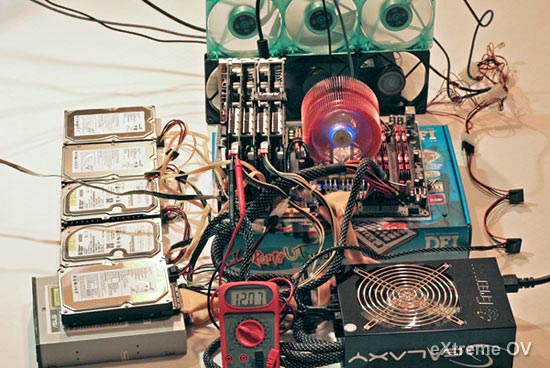 The most important power draw is on the +12v rails. Measuring the +12v rails separately with a multi-meter shows stability in Watts. 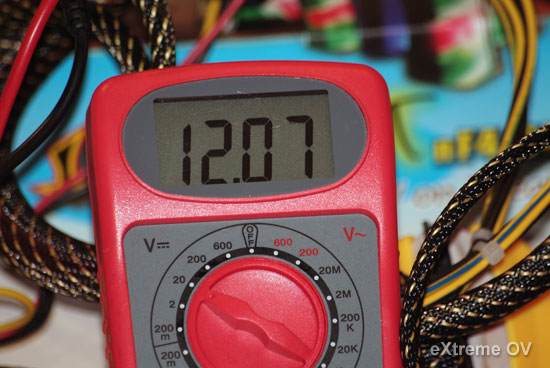 This picture shows +12v on PCI-E under load.

Both PCI-E +12v measurements results were showing +12.07v and were incredibly stable during the whole load test. The rest of the pictures were +12v results on HDDs and CPU rails. I've recorded a tiny fluctuation of 0.01v on the CPU but as we know that 5% fluctuation is absolutely acceptable and the +12v should remain between 11.4 and 12.6V. From the below results you can see that Galaxy 1000W is stable "like a rock".