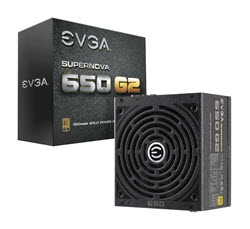 EVGA recently added two members featuring 550 W and 650 W capacities to their G2 line, which was a very smart move since a lot of users are now asking for highly efficient lower-capacity PSUs of good build quality and increased reliability. Such a combination could so far only be found in high capacity PSUs. However, take into account that such powerful GPUs as the NVIDIA GTX 980 are far less power hungry than previous-generation GPUs, or compared to everything but the R9 Nano on AMD's side, and a 1 kW+ PSU is usually overkill. A low-capacity PSU is usually also significantly more efficient at light loads, which is a great asset because modern systems consume very little energy in idle and low-utilization scenarios.

Price: $39.99
Like other members of the line, EVGA's 650 G2 unit we will evaluate today is made by Super Flower, based on a highly capable Gold-certified platform that features a fully modular cabling design. This PSU also promises a near-silent operation because of its highly relaxed fan profile, low-speed fan, and semi-passive mode feature you can opt to engage to make it completely silent at light and medium loads. Given the four PCIe connectors, this PSU can power a very strong gaming system with two GTX 980 VGAs and a powerful CPU. Some may find the 100 bucks EVGA asks for the 650 G2 PSU to be a lot, but take into account that a high-end VGA costs four to six times more and looses its value way faster than a PSU and 100 bucks will look like a decent price for a good PSU.

A PSU like the 650 G2 will, after all, last through many system builds, outlive many GPU generations. We see the purchase of a branded PSU as a true investment and would encourage you to see it as one as well. 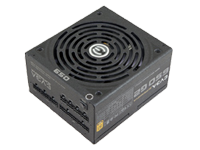